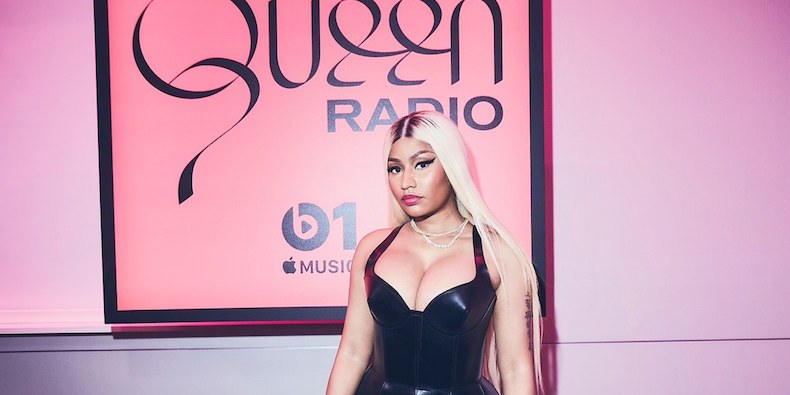 “My legacy could never be undone,” Nicki raps on Queen standout “Hard White.” Based on her recent Twitter outbursts, it’s almost like she’s forgotten about her decorated resume. Before moving forward, I want to be open about being a big Nicki fan since her acclaimed debut and will always give her credit for carrying the burden of being the only premier woman MC in rap for the decade’s entirety.

I also want to preface my upcoming statements by saying I really enjoyed Nicki’s highly anticipated Queen album. But between her album’s women empowerment themes, recent interviews, and Twitter rants, I feel as if there’s been some contradictory messaging throughout the different channels of communication.

On one hand, you have the uplifting messages looking to churn out more woman bosses walking the earth. On the other, it’s been insecurities bleeding through aggression, where she has to embarrass and eviscerate any detractor standing in her way to remain atop the mountain of hip-hop’s elite.

Billboard announced that Nicki would come in at No. 2 with 185,000 equivalent album sales on the Billboard 200, after previously asserting that earlier projections were going to be wrong. Minaj finished behind Travis Scott’s Astroworld, which took the top spot for the second consecutive week as memes broke out across social media amid the warring fanbases.

The 35-year-old quickly hopped on Twitter to assert that she spoke to Travis about how she really had the No. 1 album in the country and attempted to expose Scott’s tactics in “cheating the system” to increase sales thanks to merchandise, tour passes, a boost from girlfriend Kylie Jenner and daughter Stormi. It’s odd to witness a vulnerable Nicki trying to justify herself when the Young Money rapper already went through a phase of hitmaking and chart domination at the top of the decade. She even finished behind Taylor Swift’s 1989 to end her streak of No. 1 albums in 2014 with The Pinkprint.

Travis sold over 50K of these. With no requirement of redeeming the album! With no dates for a tour, etc. I spoke to him. He knows he doesn’t have the #1 album this week. I love my fans for the #1 album in AMERICA! I’ll explain on #QueenRadio 4 albums in, #1 in 86 countries ♥️ pic.twitter.com/CiYEuczgm3

I put my blood sweat & tears in writing a dope album only for Travis Scott to have Kylie Jenner post a tour pass telling ppl to come see her & Stormi. lol. Im actually laughing. #Queen broke the record of being number 1 in 86 countries. Thank Jesus & thank you to my fans.

Nicki then took aim at Spotify for treating her unfairly and continued to bring up her successful debut’s sales. An artist who has accomplished this much in her career should never have to look to sales for affirmation a decade later. It was honestly sad to witness the Trump-esque tweets in a borderline meltdown, which she claims as “dry humor and sarcasm.”

My first album sold 400K. No one is doing that with debut albums now. So I’m so grateful. I lost out on 12 hours of sales and did 200K in one week after I was supposedly cancelled. I bit my tongue last #QueenRadio but I won’t On Tuesday. I love you guys so much

I looked at the numbers the Carters, Kanye, Nas, etc recently did. Travis sold 200K in his first week of clothes alone. I spoke to him last night & he said he’s been selling clothes b4 the music. Billboard says they’ll change the rules cuz of this, so it should be changed now!

There’s also absolutely no reason to tear down La Flame’s accomplishment while he enters the prime of his career, in what has been a historic month for the 26-year-old from Houston. Nicki has engaged in some of those same marketing tactics by attaching albums to merchandise, tour passes, and even added 6ix9ine’s “FEFE” to her album on streaming platforms to boost first-week numbers. She should be mad at her team for not bypassing the Billboard algorithm in an optimal fashion. All artists are rightly doing everything in their power to maximize profits and sales while the opportunity is present.

This is what happens when you release a great body of work after they spent millions to ruin you. Lol. 4 albums later still breaking records. #1 in 86 countries after they said it was a wrap. Praise God. He’s about to expose them. They writing about 69 cuz #Queen is flawless.

Throughout the rants, Minaj has also made it known she believes there are forces at work within the music industry that are pulling strings to see her fail. Now, I necessarily don’t believe that, but I do feel that it’s become the “cool” take to hate on Nicki Minaj. Some of the backlash has been deserved. I strongly disagreed with the Queens native’s attack on an innocent journalist for an honest musical opinion about her. Sending the Barbz fanbase on the attack after hopping in her DMs with various petty insults is just uncalled for at 35-years-old.

In a world where everyone asks for the old version of their favorite artist, I’m looking for the next evolution. Nicki’s pen remains lethal and if her mindset matures going into crafting the next album, the Barbz leader’s magnum opus could still be on the horizon.

“A Queen knows her past, understands her present and moves toward the future.”

0 comments on “After All That She’s Accomplished, Why Does Nicki Minaj Remain Insecure?”