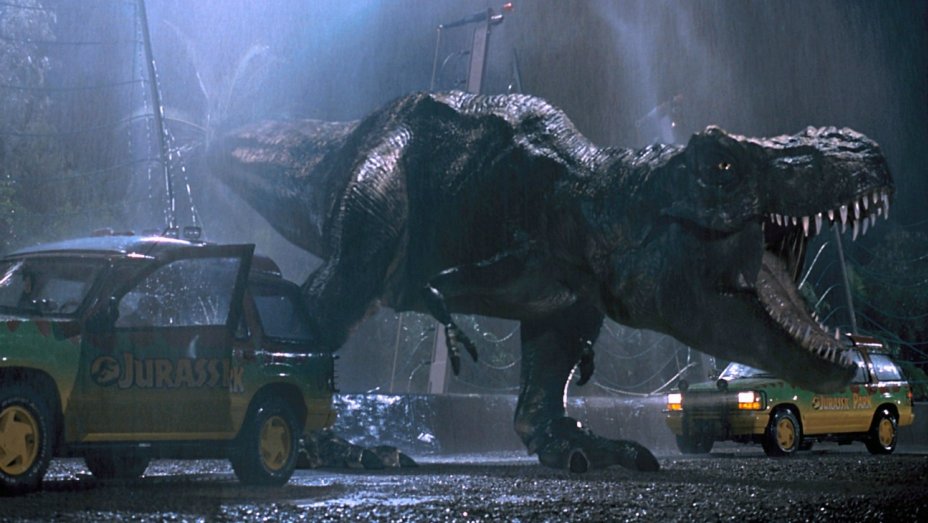 If you can believe it, Jurassic Park turned 25 years old this month. Without a doubt, Jurassic Park is one of my favorite movies of all-time. It’s one of those movies that whenever it comes on television, I stop whatever I’m doing to watch. The Dark Knight also has that effect on me. What’s not to love about Jurassic Park? Action, adventure, mystery, suspense, and Samuel L. Jackson. It’s one of the rare movies that is both entertaining for children and adults. Scientific cloning, thievery, and memorable deaths satisfy the older crowd while the unimaginable thought of seeing a dinosaur brings out your inner child. Jurassic Park was a once-in-a-lifetime movie. On the eve of Jurassic World: Fallen Kingdom, I want to relive the movie that started it all by discussing my top five scenes from Jurassic Park. Hold on to your butts.

Nothing will ever beat the feeling of seeing the dinosaurs for the first time. Everyone was in shock and awe just like Dr. Grant and Dr. Sattler. The visuals in Jurassic Park are so spectacular that you would think it was all CGI. Wrong. Remember, this was 1993, not 2018. In fact, very little CGI was used in this film. A lot of the dinosaurs such as the T Rex and raptors were full scale models. In fact, only 14 minutes of the 127 minute run time have dinosaur effect shots (CGI generated). This is why the film holds up so well. It feels real. Plus, it’s a scene from gif heaven.

Tim, what are you doing, bro? JUST JUMP! Stop messing around. You are holding on to an electric fence that is about to turn back on. I don’t care if Dr. Grant is wearing gloves with nails in them. You obviously struggle in gym class because you were too slow to climb down the fence. Your only option is to jump because let me tell you, there is no way you are surviving that electrocution and fall in real life. It’s bad enough you were electrically shocked, but your body ricocheted 50 feet backwards from 20 feet in the air. Also, the cuts between John Hammond / Malcolm, Ellie, and Dr. Grant/ kids were excellent. Edge-of-your-seat suspense.

Besides “Hold on to your butts,” “Life finds a way” is the most memorable quote from the movie. Malcom is making a scientific speech about evolution, but what makes it special is how relatable and easy to understand the speech is to the viewer. Essentially, Malcom is saying that the scientists cannot play God. They might think have all the answers, but once the dinosaurs come to life, all bets are off. Dr. Grant stumbling upon the raptor eggs brought Malcom’s theory full circle. Life DID find a way.

2. Raptors In The Kitchen

For my money, this is the scariest and most suspenseful scene in the movie. Tim and Lex just went through hell. They survived a T Rex attack, avoided a stampede, and escaped death via electrocution. All they want to do is relax and have a bite to eat.

Not on the raptors’ watch.

I rewatched this scene a few minutes ago and I still do not know how these kids not only survived, but outsmarted Velociraptors. Every time the raptor charges at Lex, I still don’t believe it’s her reflection. Side note, as smart as Tim is, he has no common sense. Tim didn’t jump on time. He made noise after noise in the kitchen to attract the raptors. If it wasn’t for Lex, Tim would be swimming in the stomach of a raptor.

1. The T Rex Attack On The Vans

I am putting this sequence in the Top 10 Most Memorable Scenes in Movie History. Steven Spielberg deserves an Oscar for this scene. I watched old promotions and trailers for the film and Spielberg purposely hid the T Rex as much as possible in order to reveal it in a grand and dramatic moment like this one. Every detail and camera angle is executed to perfection. The water cup, the flashlight, the missing goat, the powerless fence. The fear of the unknown is a powerful device.

The T Rex reveal is the culmination of making the impossible, possible. When people think of dinosaurs, I guarantee that the ones they reference are from Jurassic Park. That’s why this movie is so special. After 25 years, it not only withstood the test of time, but it will go down as one of the most revolutionary movies ever made.