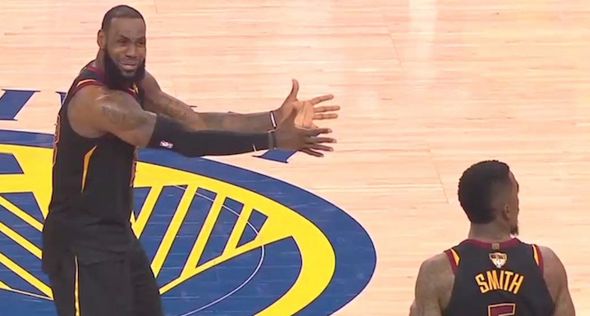 LeBron James scored 51 points in a great NBA Finals game that required an extra five minutes to decide. However, the game will be remembered for several strange incidents. JR Smith thought his team was ahead and began to dribble out the clock in a tie game. Later, he lied and claimed to have known what the score was. Video captured him confessing that he believed Cleveland had been up. If Smith really did know they were tied, that play would be even dumber. I don’t know if Cleveland would have scored had this play been executed better, but the way it played out seemed to leave the Cavs deflated.

Tony Paige had predicted a Golden State sweep with LeBron winning MVP honors. I still do not think this is going to happen, but this game was crazy enough that I can’t completely trash this insane prediction right now. Somebody else told me he thought the series would go seven games. Conspiracy theory. League wants to make money. Being that Cleveland was totally screwed, I think we can safely put that theory to bed.

This rule of being able to review a charge in the last two minutes based on whether or not a player was in the restricted area is completely insane. I’m not even crazy about checking whether or not somebody managed to get outside of the restricted area. I don’t even like having that rule of a restricted area at all, but that’s another story. Using doubt about someone possibly being in that area as a trigger to check something unrelated makes zero sense. People who did not watch the game will probably have trouble following this. That’s how crazy and weird it was. More replay is not the answer. We need less. Kevin Durant knew of this rare rule, but I had never seen it used.

The Tuck Rule came to mind. Something obscure that caught people by surprise in a big moment. There were some controversial and unusual calls. Tristan Thompson had already been ejected, so they did not hit him with a technical. Take note. After being kicked out, you are allowed to throw the basketball off of someone’s face with no risk of penalty. Kevin Love came off the bench late in Thursday’s overtime loss. The 1997 Knicks were severely punished. Russell Westbrook did not get suspended for coming off the bench this year. You never know what ruling we will get from this league. I assume there will be more tweaks to replay in the offseason following this bizarre contest.

There has been a major problem since replay was expanded years ago. Fouls are not reviewable, but they can change who is awarded possession based on touching the ball last. If you grab the offensive player’s arm and he loses the ball off his fingers, a ruling can be overturned. The defensive player didn’t touch it last. However, since he pulled his opponent’s arm, it caused a turnover. No foul can be called. If we are going to review the block/charge, call obvious fouls on other plays. As people tweeted, reviewing a potential block or charge is like using replay for pass interference in football.

Finally, we had bad beats. The first half under became a loser when Steph Curry drained one from 30 or so feet away as the second quarter expired. Cleveland in the second half getting 9 or 9.5 lost when they fell by ten in overtime after being tied at halftime. We almost had the ultimate bad beat on straight bets getting 12.5 when Steph’s shot was blocked as Golden State’s lead nearly stretched to 124-111.

Don’t forget game totals. If you went under 217.5 or anything in that neighborhood, overtime wasn’t your friend. I would like to say the series is just getting started. The truth is it appears Cleveland’s loss has all but ended it.