SISTER JEAN HAS HER HAT ON BACKWARDS pic.twitter.com/9rKTQHEV7z

Sister Jean, chaplain of the Loyola-Chicago men's basketball team, is stealing the show at the NCAA tournament https://t.co/Fio5ajxV12 pic.twitter.com/GmnTP1N7xK

Lots of unauthorized Sister Jean gear popping up. This is far and away the best #And1 pic.twitter.com/mo39QygxlJ

Loyola-Chicago (and Sister Jean) getting a hero's welcome back on campus today pic.twitter.com/zA9OC9EUf0

Sister Jean is a rockstar. When anyone gets famous, they always get the meme treatment. Most of them are catchy, but it’s rare to really put me in a belly laugh. That all changed this morning thanks to CalvinCoolRanch.

No caption necessary, just booked a one way ticket to Viral City with this one … population me (Calvin CoolRanch) pic.twitter.com/vS3sNMgXyF 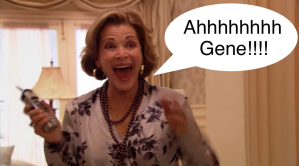 Gene Parmesan! What a trip down memory lane. Gene Parmesan is one of the greatest secondary characters of the 21st century. Gene Parmesan was only in four episodes of Arrested Development, but his character will live on in infamy. Talk about a show that was cancelled too early, Arrested Development might be my favorite comedy of all-time. I could go down rabbit holes of one-liners or talk about anything related to Gob. Unfortunately, Season 4 did not live up to the hype, but it was still entertaining. I have high hopes for Season 5.

Until then, this has been Gene Parmesan, Private Eye.