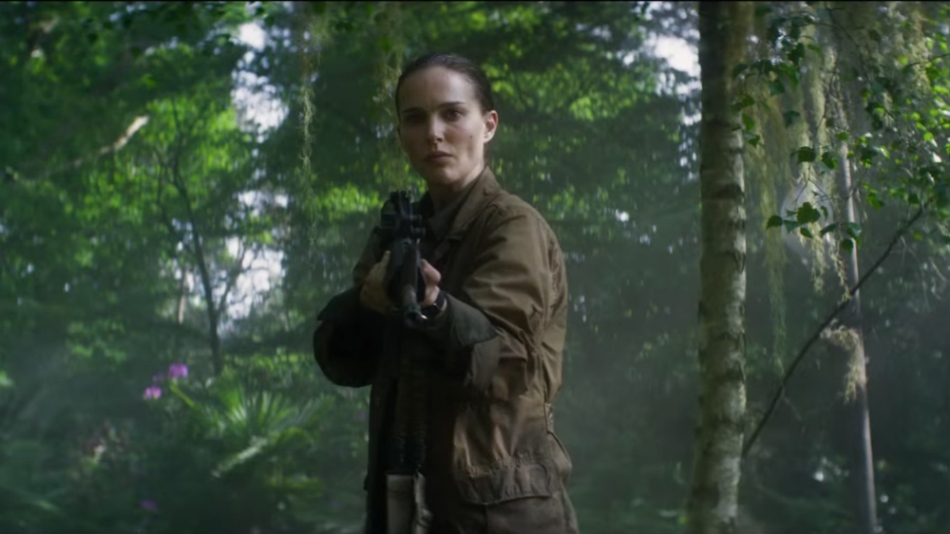 I’m going to get into my review for Annihilation just as soon my heart stops beating through my chest.

From the opening frame, the tense, suspenseful chill that runs down your spine will remain throughout the entire movie. Writer-Director Alex Garland, in his follow up to Ex Machina, took the mysterious undertone from his previous movie and turned it up to a 10 in Annihilation. The audience is left on pins and needles throughout the move, as the question of “is this really happening,” runs through their heads from start to finish. At times, the movie is more horror than thriller as it is downright scary especially as the team begins to realize what happened to previous exploration teams.

Annihilation begins with a confused Lena, played by Natalie Portman, explaining what happened on her expedition to a group of scientists in hazmat suits. Something strange has clearly happened, but a baffled Lena can’t seem to remember any major details. Jumping back to the past, Lena’s life is turned upside down when her husband Kane, played by Oscar Isaac, who was presumed to be dead, returns unannounced after a year. Kane is a shell of himself and has to be rushed to the hospital, but instead, Lena and Kane are brought to a classified “Area X” outside of “The Shimmer”, which is the root of Kane’s problems.

Determined to figure out what happened to Kane, Lena joins an all-female exploraration that will explore the Shimmer. The members of the team are Ventress (Jennifer Jason Leigh), Thorensen (Gina Rodriguez), Radek (Tessa Thompson), and Sheppard (Tuva Novotny). The team knows it very well may be a suicide mission because after 3 years of explorations, only Kane has come back alive. Once you go in, you don’t come out.

The Shimmer could be a star itself. The attention to detail that Garland put into the Shimmer was spectacular. From the vibrant plants to the mutated animals, Annihilation checks off the “visually appealing” box with flying colors. As the team goes farther and farther into the Shimmer, the tension mounts, as the women begin to lose their minds for fear of the unknown.

Throughout it all, Natalie Portman’s resiliency and sheer determination gives the audience hope that the mission will turn out positive. Portman’s final battle will disrupt your way of thinking throughout the movie and reinforce the “what is going on,” question, but in an entertaining way. Annihilation showcased Portman’s range as a fierce action hero, which is a total change up from her spot-on rendition of Jackie Kennedy in Jackie. Despite some critically panned movies in recent years, Portman is still an Oscar winner and strong lead that can headline more movies for years to come.

Garland has another critical gem on his resume. Annihilation sparked the debate of humans vs. supernatural beings and the ambiguous ending will continue the debate even after the audience leaves the theater. Annihilation is full of strange twists, but lead by Portman, the compelling dialogue and thrilling action will leave the audience on the edge of their seats.