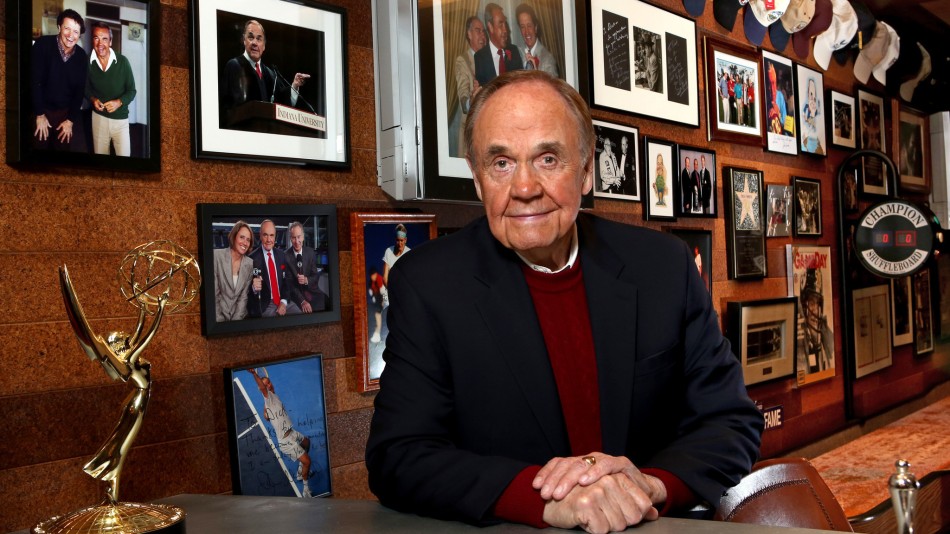 Early this morning I put on Marc Malusis. His final overnight show was coming on. He will be doing a program with Taz on CBS Sports Radio, and giving up his overnight shifts. At 1:05 the monologue was about to start. Marc mentioned the news that had come down just minutes earlier. Dick Enberg had passed away.

Yesterday Bart Scott told a story about Ray Lewis saying there was a sign from heaven. Well, yesterday was pretty odd. I happened to look back at the NFL on NBC crews from years gone by. Dick Enberg was their lead voice for many years. I thought about how pretty much every name I’d come across from years ago was no longer doing football, and many had died. Somehow I started to think about Dick Enberg possibly passing away soon. As it turns out, he already had.

I started to think about what I’d write. Two of my first thoughts were how classy Enberg was, and a random memory of his role in The Naked Gun movie from about 30 years ago. As usual, the great Funhouse didn’t disappoint. He wrote about his class, and tweeted one great Enberg movie scene. Twitter was filled with people reminiscing about Enberg. Not just their favorite sports moments.

One person after another shared their personal memories. It’s great to hear that Dick was an even better person than announcer. Jenny Dell is a sideline reporter. When her husband joined the Padres, Enberg spent an hour on the phone with her sharing everything she would need to know about the city and organization. He was always hopeful. Dick never seemed to lose that innocent boyish optimism for his Padres.

When @middlebrooks was traded from the #RedSox to the #Padres, #DickEnberg went out of his way to call and welcome us to #SanDiego. He spent an hour on the phone, walking me through everything I would need to know about the organization & the city. THAT’s the kind of man he was.

He retired from calling their games in 2016. His retirement seemed to be overshadowed by the retiring Vin Scully, who also had wonderful things to say today. Critics occasionally pointed out that Dick seemed to lose a step at times. I often point these things out about announcers. I’m sure it isn’t easy when you are about 80 years old. I’m only halfway there, and I have been going downhill for years. Bill Walton sadly remembered his friend Steve Jones last month during a broadcast. The two were partners on basketball telecasts years ago. Jones died last month, and another partner of Bill’s has passed away.

Instead of running through a long list of Enberg’s amazing accomplishments, I’ll share a few of my memories. Enberg did just about everything. Notre Dame football games. The NBA. I remember him calling Nuggets-Sonics in 1994. Denver became the first 8 to shock a top seed in the NBA playoffs. Enberg even called a seventh game between Denver and Utah two weeks later. The Jazz held a 3-0 series lead, and were one loss away from coughing up that advantage. It still has never happened in NBA history. In fact, he called Lakers-Suns one year earlier. Phoenix needed overtime to avoid losing in round one as a top seed like Seattle did the following spring. I recorded that game.

NFL broadcasting was very different back then. We hardly ever saw anything other than Jets and Giants games. Local rules were different. No NFL Sunday Ticket or RedZone channel. Jets games always felt bigger when he called them. I loved the crew of Enberg, Simms, and Maguire. One particular game from 1997 stands out. It was a national Saturday contest. Pittsburgh had a great rally and defeated New England in overtime. Throw in the playoff games and his NCAA Tournament work. He may be gone, but Dick Enberg’s calls will live forever.

0 comments on “A Hall of Famer Silenced, R.I.P Dick Enberg”