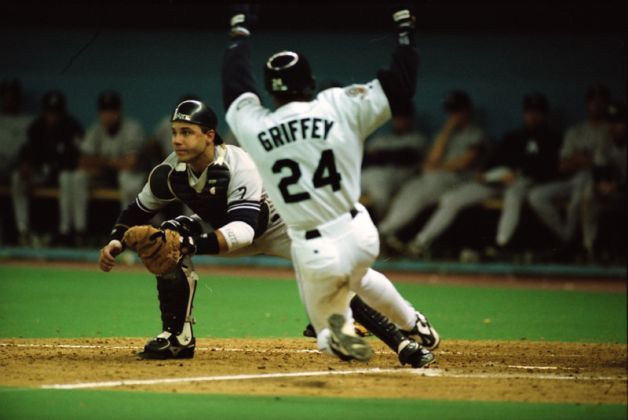 Another baseball season is in the books. We saw an exciting playoff run for the Yankees. They played a decisive fifth game for the eighth time in less than 25 years. Their series against Cleveland reminded me of some 90s baseball. Cleveland beat them 20 years ago. It looked like history was about to repeat itself. Perhaps the season is more like 1995. Buck Showalter was dismissed after a disappointing loss against Seattle. Fans were irate. Joe Torre came in. A newspaper headline called him Clueless Joe. Long story short, the Yankees beat Atlanta in 1996 and became World Series champs.

That 1995 matchup with the Mariners was crazy for many reasons. Baseball had a television deal that showed playoff games regionally at the same time. Only this Yankees-Mariners pairing went 5, so their last game was televised nationally. Boston and Cleveland played an exciting series. I couldn’t watch it. Anyway, it’s funny to look back on the Yanks-M’s series now. Tino Martinez and Jeff Nelson played for Seattle. Those players helped the Yankees win a championship one year later. Luis Sojo also played for Seattle in 1995 and won with the Yankees in 1996. Derek Jeter was a rookie. Brent Musburger called game 5. He mixed up Bernie and Gerald Williams on the final call. Don Mattingly played well. That was his only playoff appearance. The Yankees had not been in the playoffs since 1981. They appeared to be headed for a playoff spot in 1994 until the strike ended play. 1995 would begin a streak of 13 straight playoff appearances. That year’s format was 2-3, and the Yankees failed in all three chances to wrap it up in Seattle.

One thing that I feel is misrepresented about the Seattle series in 1995 was Mariano Rivera’s role. Even this year I have heard that Buck could have kept his job if he knew what Rivera was and he had. This comes up a lot. Mike Francesa. John Sterling. I don’t think this is true. Buck gave Rivera a chance late in games. Even the last one. Jack McDowell tried to close out that game, but Rivera helped get them into extras. Mariano was not closing in 1996, either. Still, he clearly was an incredible bullpen weapon. If Buck had held Mariano for a save situation and pitched McDowell earlier, that game might have ended before Rivera ever appeared in the game.

It will be interesting to see where the Yankees go from here. If they end up starting another dynasty, we might look back at the failure of 2017 as a blessing in disguise. History might be repeating itself 22 years later.

0 comments on “A Blessing in Disguise: Reviewing The 1995 Yankees/Mariners Playoff Series”