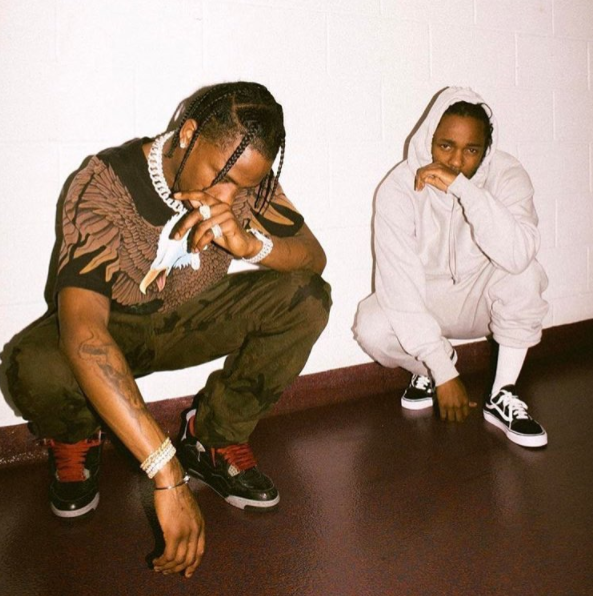 Nearly 19,000 fans packed out the hazy Barclays Center, as K. Dot and La Flame brought the DAMN Tour back to NYC for the second time in less than 72 hours. The show began with D.R.A.M opening up shortly after 7:30 and lasted all the way until nearly 11 P.M. after a Kendrick Lamar encore and a special guest appearance leaving the fans feeling like they got their money’s worth. This will be an experience I remember for a long time, as three all-time greats graced the Brooklyn stage at once.

After missing Friday’s Washington D.C. stop of the DAMN Tour, Travis Scott returned and brought his signature frenetic energy that is unmatched in the performance category. I’ve been dying to see the Houston rapper on tour since missing his Birds Eye View NYC tour stop in April. An untraditional show that had fans jumping from the upper level of the Terminal 5 venue.

Since my brother put La Flame on my radar circa 2013, Travis has quickly shot up my favorite artist list since getting the Kanye West G.O.O.D. Music cosign in 2012. Only two studio albums in, Scott is well on his way to superstardom. The auto-tune king will soon be headlining his own stadium tours so I’m happy the fans appreciated Trav and didn’t treat the him as an ordinary opener. To be honest I was more pumped to see him than Kenny since I had already seen Lamar twice prior, at school and opening for Kanye on the Yeezus Tour.

The 25-year-old began his 45-minute set shortly after 8 P.M. on the ground before making his way to perform while flying in the air on a mechanical bird. I’ve never seen anything like that before and it gives you a look into Scott’s eccentric creativity. Travis lived up to the videos gone viral sending the crowd into a frenzy with an array of tracks from “Upper Echelon,” to SZA’s “Love Galore” and all of my favorites off Birds In The Trap Sing McKnight before finishing with his most commercial song to date “Antidote,” which peaked at number 16 on the Billboard Hot 100. I will say this, I thought Travis audio could’ve been better. I’m not sure if that’s on him or the Barclays Center. Either way, tour life is good for the boyfriend of Kylie Jenner.

It took about a half hour to come down from the high that came in the form of a La Flame performance before the stadium went black and fans rose to their feet. Kendrick Lamar literally rose from under the stage platform around 9:30 P.M. and got the party re-started with “DNA” a personal anthem off his latest offering DAMN, which is now certified double platinum. K. Dot has to have some of the best breath control in hip-hop. His stage command has come a long way since I last saw him at MSG in 2013. Now, a 30-year-old seasoned vet who is at the peak of his powers and the leader of the “new school.”

The Compton native was in his bag Sunday night, giving the hyped up crowd a little bit of everything ranging from some Section 80, to DAMN. I could go on for days about the nearly 90-minute experience but will focus on the highlights. The visuals were unbelievable, as K.Dot seems to be really honing in on this Kung Fu Kenny alter-ego. He even brought out ninjas to perform beside in his yellow jumpsuit. At one point he vanished and rose once again on a small platform in the middle of the floor seats.

One moment that stood out to me was when Kendrick admitted he didn’t do this all alone and it’s amazing to see how far he has come in NYC, who always showed him love early in his career. Just six years ago he was playing in front of just hundreds of people at the locally known SOB’s and now he stares at thousands of fans filling sold-out stadiums every night. K. Dot had all 19,000 fans on their feet with their phone lights on swaying back and forth as he rapped the melodic “LOVE,” which was a sight to behold, bringing everyone together in unison.

Before wrapping up his set, Lamar brought out Travis to perform “Goosebumps,” which recently made a push in radio peaking at 32 on the Billboard charts, dropping an accompanying visual this year. This was the beginning of taking the crowd to the next level. 2 Chainz then somehow showed up in Brooklyn, getting a huge pop from the fans as he hit the stage to perform “4 AM” featuring Travis with Kendrick serving as the hype man for the banger.

As Chains and Scott exited stage right, Kendrick took back control of the stage as the show headed to its conclusion. Fans knew what was coming when the “Humble” beat dropped, as the first chorus approached the sound stopped and the crowd rapped in unison back at Kendrick, making for a tuneful scene. As the stage went dark, fans began chanting for an unlikely encore, which I thought was a waste of time. That was until I heard that soft voice and the lights came back on as Kendrick waved his arms to get the crowd so loud it felt like I was at Metlife Stadium and the Jets defense needed to make a huge 3rd down stop.

Kung Fu Kenny closed out the second Brooklyn stop with “GOD” before exiting the stage thanking the fans for another sold-out show. This was definitely one of the best concerts I’ve been to the last couple years. Totally worth the price of admission, left Barclays Center more than satisfied. DAMN has the top spot as the #1 album of the year, and Travis’ star is going to continue to grow with Astro World on the way. The east coast swing of The DAMN Tour is over as they cross the border tonight into Toronto, Canada.

All hope is not lost though, an August 25th date has been added to the second leg of the tour at Prudential Center in New Jersey with YG instead of Travis Scott.