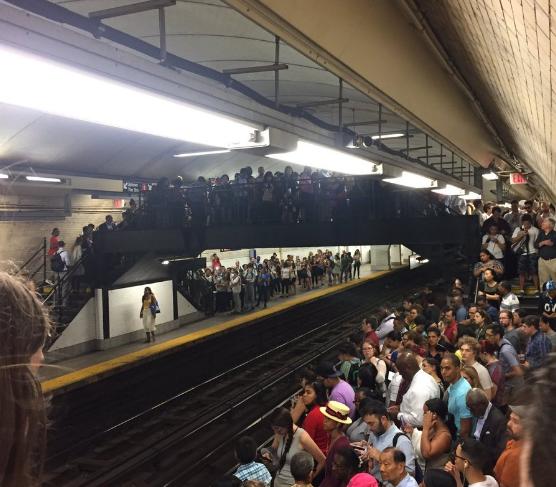 #CommuteLife gone wrong. This right here is when I would consider jumping on to the tracks. SCREW THAT.

I thought the Summer of Hell was only going to affect Penn Station. Apparently, it’s the whole damn city. The above picture was a result from a fire on the A train around 145th station. That set off a domino effect of commuters trying to scramble to get to work as the A, B, C, and D were all shut down.

The subway is dark and full of terrors. #nyc #mta #jumptheturnstyles #fail #manhattan #GoT pic.twitter.com/OhMM5kewoK

The funny thing is I don’t see anything improving. In fact, I don’t see this improving for a few years. I believe this is only the beginning. Repairs at Penn are supposed to extend through September, but I have a better chance at becoming President than those repairs ending on time. Repairs will be made. Sewer rats will take over again. The smell of shit will continue to dominate the underground. Delays will be rampant. Rinse. Repeat. Time is a flat circle.

I have to take the subway everyday because of necessity, not by choice. Believe me, I would walk to work if I could. I don’t want to sweat profusely, touch disgusting rails, and cram into a cart like sardines. It’s a necessary evil and the subway is the devil. Don’t worry. At least prices have gone down to ride the MTA!!!! Pause.

I’ll see everyone in Hell this summer.