2016 was one of the most unpredictable years in sports in recent history. From breaking curses to blowing 3-1 leads and losing multiple legends to death and retirement, this year had a little bit of everything. The athletic events we experienced re-wrote the record books and will never be forgotten in the history of sports.

The list embodies games and moments that bring out the good in sports, the essence of why we watch. If 2017 is anything near 2016 in the sports world, we are all in for a treat.

The Golden State Warriors showed no letdown in defending their championship, starting the 2015 season with 24 straight wins, giving them the opportunity to supplant the ’95-’96 Chicago Bulls as the team with the best regular season ever.

In front of their home fans at Oracle Arena, Steph Curry nailed 10 three-pointers, dropping 46 points to give the Dubs their record breaking 73rd regular season win after defeating the Memphis Grizzlies 125-104.

The death of Marlins’ pitcher Jose Fernandez shook the baseball community. One day after losing their beloved teammate. Lead-off hitter Dee Gordon smacked his first home-run of the season and proceeded to trot around the diamond with tears in his eyes and was embraced by his teammates at home plate, all of whom were donning the 16 Fernandez on the back of their jersey.

Colin Kaepernick forced America to have a conversation about racism and police brutality that many did not want to face. The embattled 49er quarterback took a knee during the national anthem of their 3rd pre-season game, which was caught by cameras. Kap’s actions ended up having a rippling impact throughout the league and local communities, as teammates and players throughout the league joined Colin in support of his protest.

The Thunder and Warriors met on a cold February night on ABC for a regular season match up. This game ended up being one of the best regular season games I’ve ever seen and kicked off a rivalry between the two which led to an epic Conference Finals and the Warriors signing KD.

Check out the highlights from the overtime thriller above.

6. Kevin Durant Shocks The NBA World And Signs With The Golden State Warriors

When KD walked off the floor after dropping Game 7 to the Golden State Warriors many thought it wouldn’t be his last in a Thunder uniform. Durant shocked the NBA community when he announced he would be signing with the Warriors.

It still doesn’t look right, but Durant is enjoying a stellar season in California and has the Warriors on top of the West.

5. Kobe Bryant Drops 60 In Farewell To The NBA

This was just straight up LEGENDARY. Kobe went out as only he could. You couldn’t even script it. Bryant dropped 60 points on 50 shots in 42 minutes in his last game at the Staples Center, erasing a 10 point deficit with 3 minutes to go, as he scored/assisted on the Lakers last 17 points.

I remember being in awe watching him give us everything he had in that last game to beat the Jazz. Very few performances bring that kind’ve star power to a game and they went home happy (Kanye West, Jay-Z, Shaq, Snoop Dogg, David Beckham and more).

Peyton Manning was benched in favor of Brock Osweiler during the 2015 season. Peyton ended up getting his job back late in the year and went on a magical post-season ride, thanks to the great Broncos defense. Denver ended up pulling the upset over Carolina in the Super Bowl 24-10, making Peyton the oldest QB to win a Super Bowl, and a movie-like ending to his illustrious career.

In what will go down as one of the best basketball games of all-time, Villanova and UNC gave fans heart palpitating excitement, down to the last second. Fast forward to the last minute of action, UNC Senior Marcus Paige drilled a double-clutch 3-pointer with just under 5 seconds left to tie the championship matchup at 74.

But after a short timeout, Kris Jenkins received a Ryan Arcidiacono pass and swished a deep game-winning three point shot as time expired, sending the crowd and fans at home into a frenzy.
Villanova notched their first National Championship since 1985, in classic fashion.

The curse of the Billy goat, Steve Bartman and black cat is no more in the southside of Chicago. The Joe Maddon led Chicago Cubs took home their first World-Series in over a century, after defeating the Cleveland Indians in 10 innings during Game 7. The Cubbies did it in improbable fashion, as the Indians blew their 3-1 lead, something Cleveland knows all too well. This is what sports is all about. You deserved it Cubs fans. 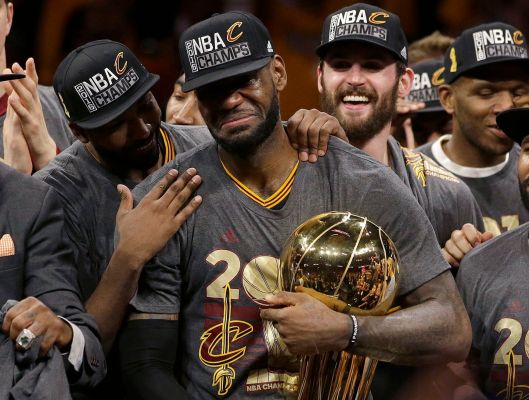 When LeBron James returned to Cleveland, he had a promise to fulfill. In June of 2016, The King finally delivered on that promise with the best comeback the NBA has ever seen in the Finals, as the Warriors blew a 3-1 and LeBron took home his third championship and the city’s first since 1964!

I have no idea what LTS is smoking. With all do respect to Lebron and the city of Cleveland, they were the 2nd biggest story of the year. Awesome story coming back from 3-1 to beat the Warriors. Cool moment, but the Cubs should be number 1 and I don’t even think it’s up for debate. Use your minds. 52 year drought or 108 year drought? End of discussion.