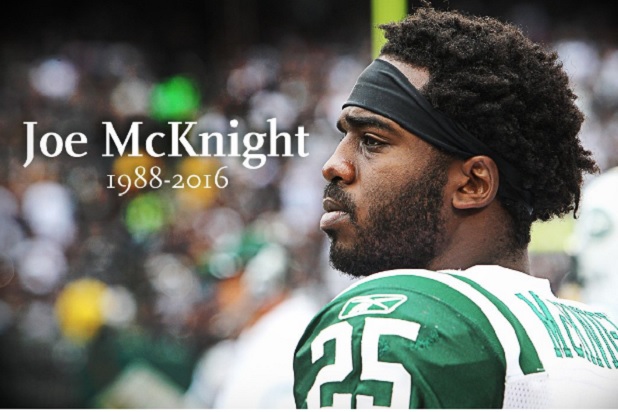 As many of you may have heard, yesterday afternoon, former New York Jet Joe McKnight was murdered in broad daylight over a road-rage dispute by 54-year-old Ronald Gasser in his home-state of Louisiana. That man was released from jail today, after shooting Joe multiple times while standing over him saying “I told you not to fuck with me,” and is free to roam the streets, but I don’t want to make this about him. Even though I can’t wrap my head around it. Could you imagine the storylines if the roles were reversed?

Just got a message saying my former teammate Joe McKnight was killed today. This hurt to the heart. I can’t stop crying. #RestInPeace

When I first heard the news, I was stunned. I thought about the conversations I shared with Joe at Jets training camp and on Twitter. Then I thought about his son, who is without a father for the rest of his life. How could anyone explain this tragedy to someone that young.

My heart hurts today! I lost my lil’ brother @JOEMCKNIGHT25 . Prayin’ for his family & his lil’ boy.#RIP #memories pic.twitter.com/5udzV4L5MQ

Everybody in the world wanted to be @ReggieBush , us in New Orleans wanted to run the ball like Joe McKnight.

The 28-year-old was one of my favorite players in his time with the Jets sine we drafted him in the fourth round out of USC in 2010. McKnight was an electric athlete and the top recruit out of high-school, carrying the burden as the heir-apparent to Reggie Bush at USC, which were tough shoes to fill.

Joe had his struggles with the Jets when he first came to the league. Throwing up at practice and grappling with the complex schemes of the NFL playbook lead to a bumpy start to his career. That was until he flashed his talent the last game of his rookie year in 2010 against the Bills, where he rushed for 158 yards.

In 2011, I’ll never forget the punt he blocked for a TD on the 10th anniversary of September 11th, which gave the Jets the lead against the Cowboys on Sunday Night Football, sending the crowd into a frenzy.

The former USC Trojan found his niche as a kick returner in 2011 and 2012, where he averaged nearly 30 yards a return and took two back for TDs in clutch situations. One even set the record for the longest play in Jet history, with a 107 yard return against the Ravens. He was an electrifying return man, and quickly became one of my favorite homies on the squad.

I met him at training camp in 2013, and I’ll never forget it. I remember Joe staying extra late to make sure every fan went home happy. whether it was a photo, a conversation, or an autograph, McKnight obliged happily and you could tell he was just a laid-back genuine guy. I remember us talking about the upcoming season and sharing our experiences at Cortland where the Jets held training camp the prior 3 seasons. One funny story I was getting on him for was the famous Cortland Applebee’s, where Joe got food poisoning and couldn’t practice for a few days from the steak and shrimp combo. He said he stayed away after the incident and goes with the ‘2 for $20’ now.

Unfortunately, the long career I hoped he’d have with the Jets did not come into fruition when he was cut going into the 2013 season before being picked up in 2014 by the Kansas City Chiefs. McKnight tore his achilles early into the 2014 campaign and has been working hard to make his way back to the NFL, since he was only 28. His latest venture was playing in the CFL this season, running with the Saskatchewan Roughriders, hoping he’d get one more shot to fulfill his dream as a starting NFL running back.

The murder of Joe McKnight just shows you how crazy this world we live in is, and how precious life is. At any second things can change, even over an argument on the road that the both of them would probably forget about in a couple weeks. I really hope justice is served on the assailant, Ronald Gasser. It’s been tough on the NFL and football community and all that knew the kind-hearted spirit Joe McKnight was. The out-pouring of love continued on social media, as players and coaches showed their love and support of Joe and his family, sending their condolences. I will never forget you Joe McKnight. I think it’s finally time to get that #25 McKnight Jets jersey I’ve been thinking about the last few years.

Our thoughts and condolences are with his loved ones. pic.twitter.com/vtEihPomt9