June 21st, 2012. The Oklahoma City Thunder dropped a deciding game 5 in the NBA Finals to the Miami Heat as LeBron captured his first NBA title in South Beach. For the Thunder, it was a huge step in the right direction at the time, coming back from 2-0 against the vaunted powerhouse San Antonio Spurs in the conference finals. Just getting that finals experience was a success in itself for a team led by 4 players ages 23 and under. Durant and Westbrook bloomed as superstars, James Harden picked up 6th man of the year honors and Serge Ibaka asserted himself as one of the best shot blockers in the NBA. The Thunder put the league on watch, showing you the blueprint to building through the draft as each one of the prior names mentioned was drafted in 2007-2009 by the team, which is a credit to their general manager, Sam Presti. Everyone thought this nucleus would be back numerous times to the finals in the coming years.

In 2011, the new collective bargaining agreement made spending over the cap penalty harsher than ever, attempting to scare teams to go into the luxury tax. For example, in 2016 the salary cap is 94 million and the luxury tax is 113 million. The luxury tax is for every dollar you go over, there is a tax owed to the league on that dollar that goes as follows.

This was a reaction to the 2010 Miami Heat “Big 3” of LeBron, Wade and Bosh. Keep this in mind, teams had no idea the cap influx would increase as much as it did because of the new television contract. So the luxury tax is having a reverse impact on building super teams in the league, as bigger markets are more willing to spend well into that luxury tax. The Cleveland Cavaliers owed a record 54 million to the league for their roster this past season, luckily it paid off with a championship.

Fall 2012 – James Harden significantly outplayed his 4 million dollar rookie salary and looked for an extension from the Thunder. Serge Ibaka entered the last year of his rookie deal. So it was decision time, do they go over the salary cap and into the luxury tax for the reigning 6th man of the year or extend Ibaka for cheaper and stay under the salary cap. They did the later, signing Ibaka to a 4 year, $49 million dollar extension and dealing Harden to the Houston Rockets right before the season for Kevin Martin, Jeremy Lamb, Two 1st round picks, and One 2nd round pick. A very underwhelming package for a player that went on to become a superstar and the best shooting guard in the NBA in my opinion. A huge botch by Thunder management. 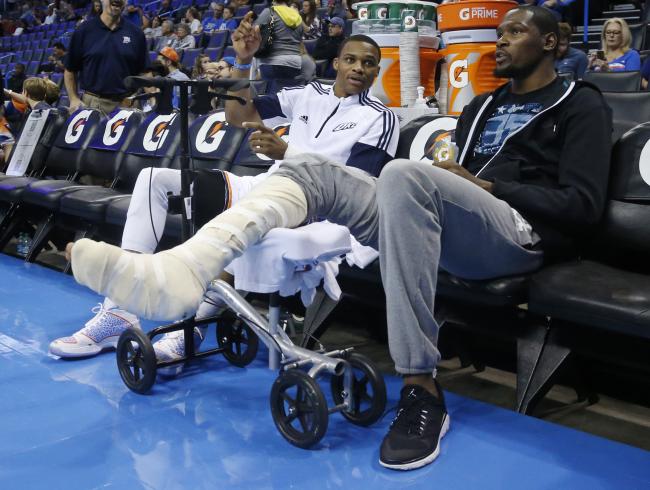 The next three post seasons for the Thunder were ravaged by injury. A torn meniscus for Westbrook in 2013, a calf injury for Ibaka in 2014 and a broken foot for Durant in 2015 prevented Oklahoma City from having a healthy team at the end of the postseason, as they failed to get back to the finals.

May 25th, 2016 – The Thunder looked to close out the Golden State Warriors at home in Game 6 of the 3-2 series. They played a great three quarters leading by 8 at the end of the third. Enter Klay Thompson, who started scorching from deep. Nailing 4 of his 11 three pointers within the first 5 minutes of the quarter. The Thunder were apart of their fair share of blown fourth quarter leads, but could they really let this one get away? Yes, as Curry then hit two 3s, the second of which tied the game at 99 with 2:47 to play. Thompson’s 3 with 1:35 remaining put the Warriors up 104-101 over the Thunder, who turned the ball over 6 times in the last 3 minutes. The Thunder saw their chance for a title fade in those last few minutes as they crumbled under the pressure. They then went on to drop Game 7 in Oracle as the Dubs pulled off the improbable 3-1 comeback.

June 24th, 2016 – Serge Ibaka was dealt in a surprising draft night trade to the Orlando Magic. Ibaka is going into the last year of his contract. The Thunder acquired explosive combo guard Victor Oladipo, first round pick Domantas Sabonis, and forward Ersan Ilyasova. I actually thought this was a good deal and would only help their chances of retaining incoming free agent, Kevin Durant.

July 4th, 2016 – After taking meetings with numerous teams in The Hamptons, it was time for Kevin Durant to reveal where he would be playing next year in a poorly written Player’s Tribune article. I really thought there was no way he would leave the Thunder after having the Warriors on the ropes 3-1. I felt he owed it to himself and his teammates to give one more attempt to bring a championship to Oklahoma City, a franchise he helped build from the ground up. I couldn’t believe it and I still can’t picture him in a Warriors jersey. Did a 73 win team just add a superstar, who happens to be a top 5 player? How is this possible? Should we just give them the trophy now? It really is crazy, and unprecedented in the league. It all comes back to the spike in salary cap and having Steph Curry on a bargain 12 million dollar contract. I feel it’s way worse than LeBron joining forces with Bosh and Wade on South Beach in 2010. Durant is a perfect fit and that team is going to be straight up scary. If Durant is all about winning he made the best choice, but to me it will always be the quality of the championship rings you win, not the quantity that defines your legacy.

The third member of the former “Big 4” is gone and the Thunder are left in quite the conundrum. Do they try to compete in the west and patch up the gaping hole Durant left? Do they strip this down and press the reset button and trade Westbrook?

Either way, by next summer, I believe the thought to be future dynasty will be no more as Russell Westbrook will test free agency, and hopefully take his talents to the Knicks. Hey, I can dream, right?

Don’t blame Durant though. Blame the new CBA, cheap Thunder management, and bad luck for Durant’s departure. A few defining moments over the past few years changed Oklahoma City forever. What if they hold on in game 6 of the Western Conference Finals? What if they resigned James Harden? What if Westbrook didn’t tear his MCL in the playoffs? How many rings would this group have before the age of 30?

A lot of what ifs are on the table as the KD & Russ experiment will end with 0 rings.

See you next year Russ!

0 comments on “It Was All Good Five Years Ago. When Did It All Go Wrong?”